EKTOS’ combination of capabilities within development, testing & reliability services, and manufacturing is attractive to many startup companies, as we can act as both a narrow specialist within one area or a “one-stop-shop” providing all or most technical services. A common feature of the projects we have done with many startups, has been a close cooperation between the customers team and our team, where we have physically co-worked a lot, both in the development phase and also in the production startup, where attention to all details is a must.

The war stopped such physical co-working, but since start of summer, this has now slowly started again. BLS from Berlin has now been the 3rd customer visiting us in Ukraine since summer. BLS is doing a very interesting product that assists therapists in treating PTSD with a method called EMDR. BLS has a mixed business model relying in revenue streams from both SW subscriptions and hardware sales. EKTOS and TECHTO has been involved in the hardware device – the tactile buzzers – you can see more about BLS and the tactile buzzers.

Ben from BLS tells us during the visit that “EKTOS was originally chosen to be a partner after some initial small tasks and evaluation. The selection of EKTOS/TECHTO was made based on fast responding and a holistic project view with knowledge in both development, approvals and production.”

Ben also says that “the invasion by Russia naturally worried us in start of the year, but we found out that the team was intact, and we trusted EKTOS/TECHTO’s communication and ability to continue operation in western Ukraine. Especially the project manager from EKTOS’ development team has been a key person in binding it all together in the hectic period where the last modifications were done, last prototypes made and all the regulatory work happening”. 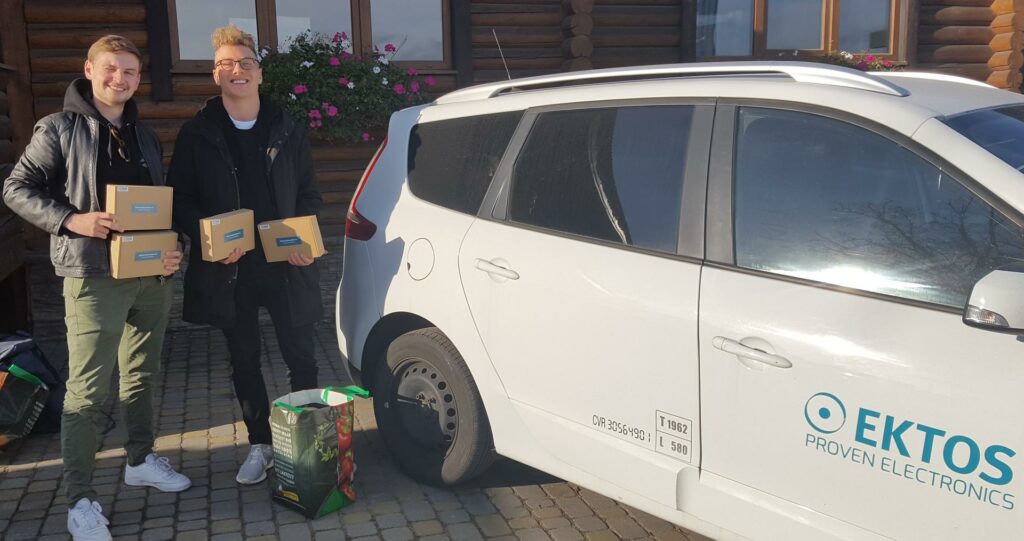 All EKTOS/TECHTO team wishes Bilateral Stimulation great success in their market launch and we look forward to see you in Ivano-Frankivsk. Here you see Ben and Nick outside our “temporary workshop” with the first produced units.

Getting ready for production and product release

Regulatory testing has been performed at EKTOS TRS in Denmark during the summer, and in early October the mass-production was started in the TECHTO factory in Ivano-Frankivsk. Some days of co-working was planned in the factory to get end-of-line testing, labelling and packaging polished, but the start-up happened to coincide just with the 2 days of massive missile attacks from Russia following the bombing of the Kerch strait bridge.

It was therefore decided to move the workshop to a hotel at the Ukraine-Polish border to avoid travelling around Ukraine in these days. “It would have been great to be at the factory, also to meet all the team together, but we got the results we came here for – and we got the production started and adjusted during our visit.” tells Nick from BLS. “During our visit we also got the news that the ISO 13485 audit has been confirmed positive from the certificating body, which may become important to us, as future products of ours might be medical devices, which will make ISO 13485 a necessity”.

How to travel to EKTOS/TECHTO in Ivano-Frankivsk

Travel into Ukraine to visit EKTOS/TECHTO in Ivano-Frankivsk is easiest done with a flight to Krakow in Poland and then 2-3 hours car transport to the Ukraine-Polish border, where our drivers will collect visitors. Travel into all areas of Ukraine is still not recommended from the Danish foreign ministry due to the war, but the daily life in Western Ukraine is little affected by the war in south and east. It is possible now to have a normal travel insurance covering Ukraine. EKTOS’ employees from Denmark now visits our Ukraine sites, when there are tasks that are solved best with physical co-working.