Do like the AlphaLine team and visit us in Ukraine

”We have tried outsourcing of software development before, elsewhere, and it was terrible! We anyway decided to outsource this project to Ukraine, but the fear of something going wrong was there.” This is how the two Belgian entrepreneurs and founders of AlphaLine, Nancy and Quentin, expressed concerns that you might also have experienced, if you ever tried outsourcing. When Nancy and Quentin paid a visit to their engineers in Kharkiv, however, their concerns went away.

Does it really pay off, to pay a visit?

AlphaLine’s product is a portable, powerful, and beautiful docking station and power bank for laptops and phones. As real entrepreneurs Nancy and Quentin developed their product idea themselves and raised the money for it via a crowdfunding platform. 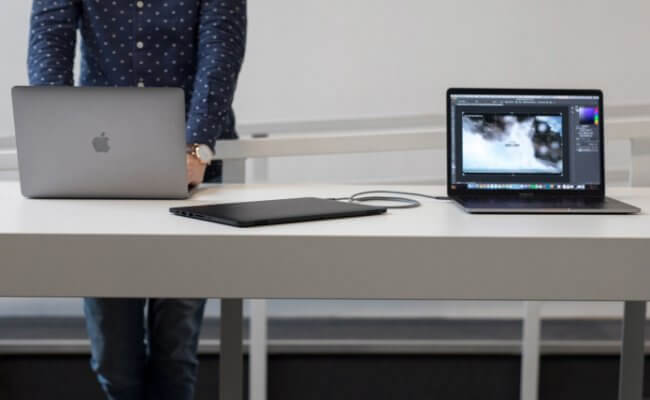 Because the product is cutting edge, new technologies enter the market while the engineers are in the process of designing it. In order to work efficiently in this mode, the engineering team and the client need to be flexible and possess the will and ability to adapt to changes as new circuits and technologies pop up. This requires very good communication and a high level of trust between the developers and the client. This was achieved after Nancy and Quentin met with their engineers in person.

”It changes a lot of things to meet the team in person,” Quentin said, ”The office is really professional and you can see that good work is being done here. When you are a start up, you have no money, but coming here early in the project would have been money very well spent.”

”When you are a start up, you have no money, but coming here early in the project would have been money very well spent.” Quentin, founder of AlphaLine

Sergii Shavshyn, project manager at EKTOS, also sees a real value in having gotten to know Nancy and Quentin in person, “We understand each other better now and we communicate very openly. For example, if I disagree with one of their suggestions, I tell it to them straight up without hesitation. I think they appreciate that.”

“We understand each other better now and we communicate very openly.” Sergii Shavshyn, project manager at EKTOS

That the engineering team has been good at recommending alternative solutions and showing Nancy and Quentin how different approaches would affect the project schedule and budget, is definitely something Nancy and Quentin appreciate. They conclude that such kind of discussion and advice is “outstanding and extremely valuable for a startup like AlphaLine.”

The AlphaLine team has visited the engineers in Ukraine several times since their first trip in April. After a particularly intense weekend trip when the first prototypes were being finalized, we received an email from Quentin thanking the engineers for their effort, ”These two days have been quite stressful and intense but I really enjoyed it. Working with smart, funny and passionate people like you is a great source of motivation.” Sergii and the rest of the engineering team enjoy being a part of an interesting project, but Sergii adds, that it is even more interesting being close to the clients, because he can feel Nancy and Quentin’s excitement about their product.

While the team is working hard to get the first units ready for mass production the rest of us are cheering – like Nancy and Quentin, we are looking forward to seeing the product in the shops!