The JHminiStrø robot distributes feed and bedding materials to cows, pigs and chicken. The system runs on rails fastened to the stable ceiling, and more than 300 JHminiStrø robots deliver feed and bedding to farm animals in Denmark and abroad. The close and long-standing collaboration between EKTOS and JH Agro includes the first and the second generation of JHminiStrø, and another project is under way.

– Our partnership started about two and a half years ago with the first version of JHminiStrø, says Lars Forbech, head of development and manufacturing at JH Agro.

– We asked EKTOS to take over production of the circuit boards for the machine’s control unit. Later on, when we decided to develop a new version of JHminiStrø, we asked them to develop all the electronics. One of EKTOS’ specialists helped us assemble a list of requirements containing all our requests for improvements and new features. He integrated our input into a performance specification for both software and hardware. Then EKTOS built the system, got all the necessary type approvals, sourced materials and chose a manufacturer. EKTOS also took responsibility for control of production quality. 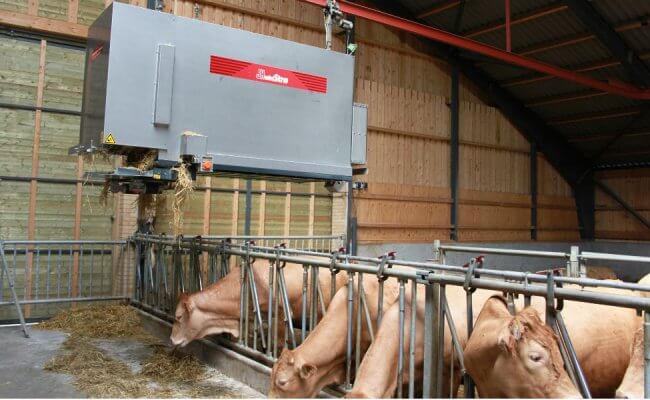 Jesper Holst, CEO of EKTOS elaborates:
– It is always exciting to build a close and long-term collaboration. JH Agro put a lot of trust in us, since they did not have the necessary in-house expertise in electronics development. From a technical point of view we had to overcome some interesting challenges. These devices are active 24/7, so they have to be robust and reliable. Furthermore they run in a tough stable environment with dust and dirt and ammonia affecting the electronics. So we developed a solution with all electronics heavily encased, including the touch screen the farmer uses to programme and control the system.

According to Lars Forbech at JH Agro, EKTOS has helped improve the new version of JHminiStrø in a number of ways:
– The rail system, which the robot uses to navigate around the stable, remains unchanged. But now we can handle up to five robots on one rail system. Also we have developed a wireless control of the switch tracks, and we can control the weight of the feeding material at the filling station. We can also do remote support of the system, and a new 10-inch touch screen with a new interface makes the machine easier to use for the farmer.

EKTOS has helped improve the new version of JHminiStrø in a number of ways – Lars Forbech, head of development and manufacturing at JH Agro

Jesper Holst, EKTOS, emphasizes that the new wireless control are both technically sophisticated and innovative. The control that manages the pre-programmed route of the robots consists of sensors communicating in a mesh network developed by the Danish company NeoCortec.

JH Agro and EKTOS have already embarked on a new project together. EKTOS is developing and doing quality control of new control software for JH Agro’s patented system for slurry acidification, JHacidificationNH4+. In the system, pig or cattle slurry is acidified by adding sulfuric acid (H2SO4) to the slurry. The sulfuric acid reduces the pH and changes the chemical balance between ammonia (NH3) and ammonium (NH4+) towards NH4+, which does not evaporate.

The system significantly improves animal welfare and the work environment inside the housing and reduces the pollution of the atmosphere and surrounding environment.

The next generation of JH Agro’s slurry acidification will be equipped with new control software with a range of new features. Among other things it will be able to handle 12 strings instead of only 6 in the old version of the system.